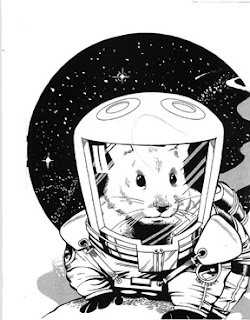 Space Ham is in space.

I think it's time for an update about What's Up With Bunnies in Space Now. As you may already know, I graduated from UCI in June, and have been ultra lazy about posting the last couple of playlists.  I'll post them, I swear! I didn't renew Bunnies in Space for Summer, but may be back in the Fall as I have found a new home that is not too far away! Who knows! I do miss my radio family very much and still stop by once in a while to hang out and give tours.

What else is up? Curiosity, the latest Mars rover (which is actually a Mars Science Laboratory) landed on Mars and is sending back pictures and data which will tell us whether Mars has ever been or ever will be habitable by bunnies and other life forms. Wow! Our friends at Planetary Radio are super excited about this development.

The Bunnies in Space twitter is now more of a personal thing, but feel free to follow for sciencey things and silly things.
Since I'm not broadcasting songs over the radio, why not post them here once in a while? Here's one now!