PHYSICS ON THE FRINGE

institute for figuring director and hyperbolic crochet coral reef maker margaret wertheim has a new book out as of yesterday. check it out! from the IFF: 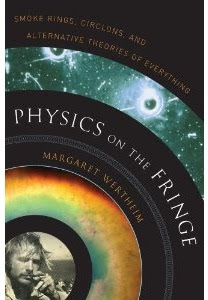 For the past fifteen years, Margaret has been collecting the works of 'outsider physicists' – people with little or no scientific training who spend their lives inventing alternative theories of the universe. In this ground-breaking study, Wertheim follows the adventures of Jim Carter – the Leonardo of outsider scientists – as he develops his ideas about gravity and the structure of matter using a disco fog machine to make giant smoke rings.

Beginning with the life of one idiosyncratic individual, the book opens out to fundamental questions about the role of theoretical physics in the imaginative landscape of our time. Wertheim draws a parallel between the emergence of outsider artists in the early twentieth century and the burgeoning community of outsider physicists today. Deeply human and literally fantastical, "Physics on the Fringe," challenges our conception of what science is, how it works, and who it is for.