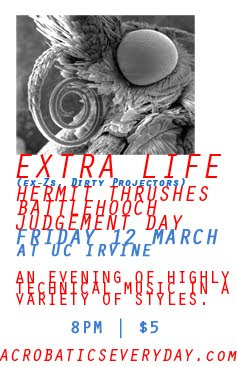 Really excited for this one. EXTRA LIFE is a treat to be able to host, and the rest of the bill is perfectly matched. For $5, I don't think this can be matched in entertainment value.

EXTRA LIFE
Exceedingly virtuoustic chamber-prog. One of the most technically impressive bands I've ever seen, plus a surprising deftness in blending baroque pop, math-rock, and something like...post-metal. Charlie Looker leads this bunch and has formerly played and toured with Dirty Projectors and Zs.

"I recently saw a math rock band that began one of its songs by quoting the opening of U2's "Sunday Bloody Sunday," then stopping abruptly and charging into a completely unrelated riff. That's pretty typical. More often than not, math rock isn't about anything except its own (perceived) complexity and a kind of self-conscious irony that acts as a shield. You don't risk exposing too much of yourself if all you're saying is, "Check out this riff! And also, U2 sucks, ha ha!"

The thing with Extra Life is that their music is about 18 times more accomplished and complex than most math rock bands could ever hope to be. And yet their music isn't the least bit ironic, and its complexity nearly always sounds like it's in the service of some broader idea. Their music is a construction, not a deconstruction, and it's complex because it has to be, not because of someone's desire to seem accomplished by playing in 13/8. (You can trust Looker when he says he doesn't listen to prog.) " - Dusted

SOME MP3s for your listening pleasure:
Blackmail Blues
The Refrain
The Ladder

HERMIT THRUSHES
We had these weirdo-pop guys last year and they killed! Fiendishly off-kilter math-pop filled with discordant hooks and vocal harmonies.

BATTLEHOOCH
Battlehooch is easily the greatest classic experimental jazz rock band currently based in San Francisco, California...and maybe the world. They will thrill you with wind instruments, a firm handle on the best of the 1960s weird, costumes, and basically the best of what rock and roll can possibly be. Destined for greatness.